Exclusive: Behind-the-Scenes as Reese Witherspoon Gets Red Carpet Ready for the Globes

Fact: primping for the Golden Globes with Reese Witherspoon would probably rival the fun you had getting ready for prom with your best girlfriends years ago. Add her makeup artist Molly R. Stern and her hairstylist Adir Abergel into the equation, and you've got a party that just might rival the fun of the actual event. In preparation for the Golden Globe Awards, we tagged along with the star's glam squad to see exactly how her look came together. To complement the impact made by her bold Versace gown, Stern went for a neutral color palette with a petal pink lip, while Abergel crafted the most gorgeous chignon we've seen take the carpet. Scroll down to see exclusive photos documenting how the star got ready for the big event, and to find out the products and techniques behind her stunning look.

After a layer of Chantecaille Future Skin Foundation ($76; nordstrom.com), Stern enhanced Witherspoon's cheekbones with a matte contouring cream, followed by the Liquid Lumiere in Brilliance ($39; nordstrom.com) across the top to catch the light. A soft rose blush was then applied to the apples of her cheeks, creating a believeable glow.

Once the blush was in place, Stern moved onto the eyes, tracing the Make Up For Ever Aqua XL Liner in Me 42 ($21; sephora.com) along her lashline. She then smudged the Chantecaille Mermaid Eye Color in Triton ($34; nordstrom.com) into the liner, then used the Luxe Eye Duo in Monte Carlo ($58; nordstrom.com).

Easy on the Eyes

As Adir Abergel worked on the star's hair, Stern ran the Elizabeth Arden Liquid Eyeliner in Plum Desire ($25; macys.com) along her upper lashes, then used the Gilded Brown color ($22; macys.com) on just the outer corner. Following a few pumps of the eyelash curler, Stern swept on a dark brown mascara.

A handful of the products Stern used on the star decorated her makeup station. To finish, she chose a duo of two yet-to-be-released Chantecaille Lipsticks to create a customized blend for Reese.

Armed with his trusted Dyson Hairdryer ($400; sephora.com) in hand, hairstylist Adir Abergel applied a layer of the Virtue Uplifted Volumizing Whip ($36; virtuelabs.com), then dried the product into her strands. "I rough-dried hair first, then continued with a round brush to create a voluminous, smooth effect, making sure to sweep the bangs over," he explains.

Abergel then hit sections of Witherspoons hair with a curling wand to form deconstructed waves, teased the hair at the crown, and anchored her strands into a low ponytail using a hair elastic.

Smoothing Over Her Layers

A generous amount of the Virtue Create 6-in-1 Styler ($36; virtuelabs.com) was used through Witherspoons mid-lengths and ends to tame flyaways and impart shine.

To finish, Abergel wrapped Witherspoon's lengths around the ponytail's base. "I twisted the ponytail into itself counterclockwise, then used hair pins to pin the twist onto her head," he explains. "I hid the ends by tucking and pinning them against the head."

Abergel takes the time to make sure every hair is in place prior to her red carpet reveal.

The Dramatic Back of the Dress

The elegant updo ensured that the Origami-esque detailing at the back of Reese's canary yellow number were on full display.

Like yin and yang, the artful updo and soft makeup brought balance to the cascading gown.

Off to the Globes!

We hate to see her leave, but with a train like that, we sure do love watching her walk away. 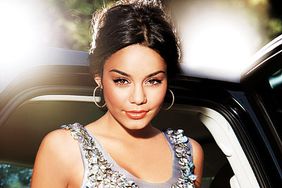