This year’s Golden Globes nominees list is all about the transformation. From Mary J. Blige’s stripped-down performance as Florence Jackson in Mudbound to Margot Robbie’s makeunder into Tonya Harding for I, Tonya, there are quite a few chameleons gunning for Golden Globes gold.

Blige recently opened up about how stepping away from her usual glam persona for the role changed her for the better.

“I had to surrender and commit completely to Florence," Blige told Billboard. “Like the little ugly boots she was wearing every day and those dresses ... We couldn’t wear makeup. We couldn’t have nails. We couldn’t do eyelashes. I was stripped down to the bare necessities of Mary. And that really helped me because people were saying things like, ‘Gosh, you’re so beautiful.’ It helped my self-esteem.”

Emma Stone was also nearly recognizable as tennis icon Billie Jean King in Battle of the Sexes, and told The Hollywood Reporter playing the role was even more challenging since it marked the first time she hadn’t played a fictitious character.

"I've never played a real person before and it's, like, this person is an icon and an absolute badass that I could never even hope to be exactly like," Stone told the mag. "Capturing the essence was very important to us. It was super challenging, but [King] was so warm and welcoming and open to all of it.”

The 2018 Golden Globe Nominations Are In

Stone, Robbie, and Blige’s transformations paid off — all earned best actress or best supporting actress nominations, respectively. And they weren’t the only ones whose makeovers could earn them a Golden Globe. Take a peek at more of the best transformations on the 2018 Golden Globe nominees list!

Emma Stone, Battle of the Sexes

Michelle Williams, All the Money in the World 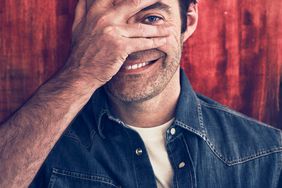 Bill Hader Doesn't Understand Why You're So Obsessed With Him