The Best Beauty Looks From the 2021 Golden Globes

Erin Lukas
Erin is a Brooklyn-based beauty editor and has been with InStyle since 2016. She's written for NYLON, Teen Vogue, Into The Gloss, FASHION Magazine, and more. She graduated with an Honors B.A. in Creative Writing and English Literature from University of Windsor, Ontario College Graduate Certificate in Book and Magazine Publishing from Centennial College, and A.A.S in Advertising and Marketing Communications from Fashion Institute of Technology.
InStyle's editorial guidelines
Kayla Greaves

Kayla Greaves
Kayla Greaves is the Executive Beauty Editor for InStyle, overseeing all beauty coverage on the site. She loves skincare, a long-lasting red lipstick, oxtail, and being Jamaican. Kayla has also dedicated 17 years of her life to Grey's Anatomy, and won't give it up any time soon — no matter how ridiculous the drama gets.
InStyle's editorial guidelines

The 2021 Golden Globes might look different from previous years, but the bi-coastal, part-virtual show hasn't stopped celebrities from bringing the glamour.

From Laverne Cox's crown braid to Elle Fanning's nostalgic cat eye, the night's beauty moments are reasons to feel excited about doing our hair and makeup again. And of course, inspiration for our pre-Zoom call routines.

The Best Looks From the 2021 Golden Globes

Ahead, all of the must-see celeb beauty looks from the 2021 Golden Globes.

Laverne Cox came in red hot for the 2021 (virtual) Golden Globes. The stunning actress paired a glossy red lip with sultry eyes for glam, then styled her hair in a beautiful blonde crown braid — fitting for the queen she is. As far as her mani goes, Cox went for long, black nails.

The gorgeous actress kept things simple to present an award at tonight's show. Robbie's soft glam, crafted by Pati Dubroff using primarily Chanel Beauty products, included Chanel La Solution 10 de Chanel for skin prep, Les Beiges Healthy Glow Foundation in B31 to even out complexion, and Tower 28's BeachPlease Cream Blush in After Hours for a rosy glow. The artist finished off with a swipe of Chanel's Rouge Coco Flash in Ultime to give Robbie's lips a pop of color. For hair, the actress went for a side-parted, asymmetrical lob with lived-in roots, which was styled in loose waves.

Makeup artist Erin Ayanian-Monroe was not playing any games when it came to Elle Fanning's Golden Globes makeup. The expert used L'Oreal products to give the star Old Hollywood glam, which included thick black top liner, fluttery lashes, and a pink nude lip. Fanning completed the look by styling her hair into a sleek, twisted bun.

The actress brought the butt-length braid to the 2021 Golden Globes — and it's never looked so glamorous. Hairstylist Randy Stodghill used Phyto's PhytoSpecific Baobab Oil and PhytoSpecific Moisturizing Styling Cream for a super sleek and shiny finish. For makeup, D'Andre Michael looked to Bassett's plum dress for inspiration. He gave her a matching smoky eye with Pat McGrath Labs' Mothership VII Divine Rose I Eyeshadow Palette and Divine Rose Luxe Eyeshadow Quad: Eternal Eden, which he paired with a nude lip. The exact shade is a mix of McGrath's Permagel Lip Pencil in Browneuveaux and Mattetrance Lipstick in Divine Rose.

Amanda Seyfriend is one of many celebs who embraced soft glam hair and makeup. The Mank star's peachy makeup created with Lancome products was pulled from the flowers on her Oscar de la Renta gown. As for hair, Fekkai creative director Renato Campora looked to 1940s Hollywood for inspiration. Using a curling iron and multi-brush, he gave Seyfried loose, brushed-out waves. For added volume and texture, he finished things off with a spritz of Fekkai's Full Blown Volume Texturing Spray.

Neck and Dec ProtectorKaley Cuoco ditched her curtain bangs for the side-swept variety at the 2021 Golden Globes. The Flight Attendant star's loose waves were created by hairstylist Christine Symonds using Hidden Crown hair extensions for added volume, along with T3's Curl ID 1 1/4 Curling Iron and Lucea ID Flat Iron. But before Symonds took hot tools to the buttery blonde, she prepped her hair with Clairol's Shimmer Lights shampoo, conditioner, and toning mask to get rid of any brassiness. Cuoco kept things simple and pretty with her makeup, opting for a swipe of Charlotte Tilbury rose lipstick. Her makeup artist Jamie Greenberg prepped the star for her skin-first makeup look using CurrentBody Skin's LED Light Therapy Mask and Neck and Dec Protector.

When it came to the hilarious Tiffany Haddish's glam, she let her sky-high lashes do all the talking. To start off the look, makeup artist Ernesto Caillas prepped the star's skin with Shiseido's Ultimune Power Infusing Serum Concentrate. Next, he evened out her complexion by using the brand's Synchro Skin Radiant Lifting Foundation in 440 Amber. To make Haddish's eyes pop, Caillas used a generous amount of ControlledChaos Volumizing Mascara Ink on her lashes, then finished with a swipe of Modern Matte Powder Lipstick in Semi Nude 508. As for hair, the star debuted a new color: honey blonde, crafted by celeb hairstylist Ray Christopher, who used SH-RD Protein Cream to give her shine. He also used Bevel tools to keep Haddish's short, curly cut looking sharp.

As a presenter at this year's Golden Globes, the actress made sure her glam was top notch. Erivo's go-to makeup artist Terrell Mullin used Armani Beauty products to give her a beautiful, bold purple cat eye. He completed the look with a nude lipstick from the luxury brand. Hairstylist Coree Moreno made sure the star's signature low cut was lined up to perfection.

Disco is alive and well, thanks to Lily Collins's voluminous '70s curls by Pureology global artistic ambassador Gregory Russell. He used a combo of Conair brushes and ghd hot tools when working on the Best Actress in a Musical or Comedy TV Series nominee's hair, and set her bouncy curls with Pureology's Style + Protect Lock It Down Spray. Makeup artist Fiona Stiles also gave the '70s a hat tip, with Collins's violet and emerald smoky eye and sheer, glossy plum lip, using Lancôme products, including the Color Design Eyeshadow in Midnight Stone and Siren's Emerald.

Soft glam was a recurring theme of the night, and Salma Hayek is just one of many celebs who did it right with her flutter lashes, rose lipstick and loose, bouncy waves. Mario Dedivanovic used products from his namesake line on the star, including the Master Mattes and Master Metallics Eyeshadow Palettes. For extra shiny waves, hairstylist Jennifer Yepez spritzed Hayek's hair with Unite Hair's 7Seconds Glossing Spray.

The Crown star took home the award for Best Actress in a Television Series Drama for her portrayal of Princess Diana. To accept the award, Corrin payed homage to the '60s with her ruffled dress, slicked-back, side-parted bob, and cherry red lipstick. The star's makeup artist Florrie White gave a nod to Twiggy, another British icon, with Corrin's fluttery lashes care of Sisley-Paris' new So Stretch Mascara.

Blame Rosamund Pike for convincing you get a bob in 2021. The I Care A Lot star wore the classic chin-length cut with super sleek with blunt ends and a center part. Her red lip matched her ruffle tulle Alice Goddard dress.

This Is Us star Susan Kelechi Watson was a true vision in blue tonight. Makeup artist Dana Delaney gave the star smoky glam, complete with a shimmery blue top liner and a nude lip. For hair, the legendary Vernon François used Redken's Acidic Bonding Concentrate collection to give the actress a beautiful blowout on her natural hair that still showed off a bit of her texture.

Shira Haas partnered with none other than Chanel Beauty and makeup artist Kate Lee to give us this beautiful coral lip and neutral eye look. Lee used Chanel's Rouge Coco Bloom Lipstick in Vivacity and the brand's Inimitable Waterproof Mascara in Noir for her lashes. The actress then opted to wear her hair in a slicked back style, complete with a side part. The virtual red carpet look was crafted by hairstylist Mara Roszak, who used Matrix's Total Results High Amplify Dry Shampoo to give the hair a bit of texture, followed by the brand's Shape Switcher Molding Paste to lay down any flyaways.

The Music actress gave audiences subtle glam with her hair to keep all of the attention on her Louis Vuitton gown. Hairstylist Lona Vigi used products from äz Craft Luxury Haircare to craft the style. "The minute I know that a dress comes from a certain era or time period, a memory from a specific time, I try to go in the opposite direction and not lean into that because otherwise it becomes too "costume" looking and I can't stand that," she says of the look. "So for hair we went modern, but off the shoulder and relaxed. Because really it's all about the dress." Hudson paired the look with a pink nude lip and fluttery lashes.

The ever-glamorous actress worked with makeup artist Sabrina Bedrani for tonight's show. The beauty expert started off by prepping the star's skin with CurrentBody LED Mask, then evened out her complexion using Dior's Forever Skin Glow Foundation in 3W. She followed up with the luxury brand's Backstage Glow Face Palette to give the actress' face a warm finish. Bedrani then added a swipe of Dior Rouge 884 Célèbre to Gadot's lips to complete the look. For her loosely curled bob, hairstylist Mark Townsend reached for Dove Hair Therapy products. He started with the Style + Care Volume and Fullness Mousse before blow drying and curling the hair, followed by the Style+Care Flexible Hold Hairspray to keep the look in place.

While you may not have expected to see Ben Stiller in this roundup, the veteran actor totally deserves to be here. During the 2021 Golden Globe Awards, he debuted a gorgeous head of silver hair, which we think suits him so well. Also, hello glowing skin.

For her Golden Globes debut, The Queen's Gambit star brought the glamour. Hairstylist Gregory Russell styled Taylor-Joy's hair into a super sleek style, using ghd hot tools and completed the look with a deep side part. For makeup, the star went with a classic red lip by Dior. Georgie Eisdell used the brand's Rouge Dior refillable lipstick in #434 Promenade and "snapped the edges" with the Dior Contour lip pencil in #100 Nude Look. And of course, a signature scent is always the best accessory. The star wore Viktor&Rolf's Flowerbomb Dew, of which she's the campaign star. 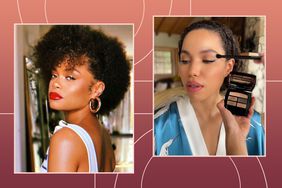