Anya Taylor-Joy is having a moment, baby. And it looks like the star is happily soaking it all up.

While the actress took home the Golden Globe for Best Performance by an Actress In A Mini-series or Motion Picture Made for Television for her role in The Queen's Gambit, Taylor-Joy was paying tribute to the role that got her to the virtual red carpet way before the gold statue was even in her hands.

Although the star was unable to attend the show in person (like many of her other fellow actors), Taylor-Joy tapped celebrity nail artist Kim Truong — who has worked with celebs like Kerry Washington, Hailey Bieber, and Tia Mowry — to create an unforgettable Queen's Gambit-inspired mani.

"Beauty inside and out! @anyataylorjoy congratulations," Truong simply captioned the post.

Truong created a mismatched mani for Taylor-Joy's big night, a look that has become increasingly popular over the years.

While the nail artist hasn't shared the exact polish shades she used, she opted for a mix of solid baby pink, translucent pink, as well as black and white inspired nail art on various fingers.

Truly a manicure fit for a queen. 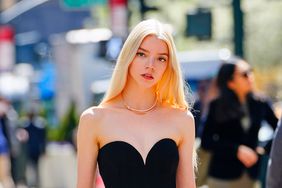