While Film Independent's Spirit Awards honored the year's scene-stealers, it was Angelina Jolie who stole the show itself, revealing her baby bump as she and Brad Pitt walked the blue carpet at the Santa Monica Pier. Jolie and fellow indie queens Sienna Miller, Ellen Page and Cate Blanchett were among the cool crowd who laughed at host Rainn Wilson and lauded the best in independent movies at the annual film fete.

After snacking on popcorn as she made her way into the tent, Best Female lead nominee Sienna Miller switched to GH Mumm champagne and cozied up to boyfriend Rhys Ifans once the show got underway. Despite the casual dress code, Miller wore an elegant midnight-hued lace Monique Lhuillier cocktail dress for the occasion.

Ellen Page reunited with Juno crew Allison Janney, Olivia Thirlby and Diablo Cody-who picked up the trophy for Best First Screenplay-at the ELLE green room, where guests picked up goodies from Biolage haircare and Havaianas. As Page ((in Yohji Yamamato) later made her way to the stage to accept the award for Best Female Lead, she received applause from fellow nominees Angelina Jolie, Sienna Miller and Parker Posey.

Kate Beckinsale and Matt Dillon teamed up to present the award for Best Female Lead, one of the most star-studded categories of the event. Backstage, Dillon happily accepted an annual pass entitling him to a year's worth of free films at AMC, but made it clear he'd still be supporting the arts. "I'm only going to use it to see the blockbuster films," the actor joked. "I'm still going to support independent films by buying my tickets!"

"It's kind of cruel to make a pregnant lady waddle that far," cracked a very-pregnant Cate Blanchett, after her long walk to accept the Best Supporting Female trophy for playing Bob Dylan in I'm Not There. Blanchett (in Vera Wang) dedicated her win to fellow Australian Heath Ledger, calling him, "one of the most beautiful, independent spirits of all."

It's nice to have a turtleneck on and still feel glamorous and cute," said Kerry Washington of her Oscar de la Renta ensemble, which she accessorized with some Solstice shades at the backstage gift lounge. The sunny actress also summed up the, well, spirit of the Spirit Awards. "Everybody here gets the feeling that just participating in independent film makes you a winner," she mused. "We're all celebrating each other and celebrating the industry, which is most important."

Leading ladies Maria Bello (in Calvin Klein) and Felicity Huffman mingled backstage before fulfilling their duties as presenters. Bello, for one refused to pick favorites from the list of nominees. "A lot of these guys are first time filmmakers. It took a lot to make their films-they had passion and really had to believe in it for years. I'm rooting for everybody here!" said the actress. Another reason to celebrate? "It's a great excuse to drink champagne in the middle of the day," Bello joked.

Just a day before learning whether she'll take home the Best Supporting Actress Oscar for her role in Gone Baby Gone, Amy Ryan aimed her attention on helping present the Spirit Award for Best Documentary. Ryan's co-presenter, Josh Hartnett was a little less focused, blaming a slip-up on the teleprompter and announcing that the microphone stand was too low.

Honorary Film Independent Spirit Awards chair Javier Bardem was undoubtedly the afternoon's object of affection. Aaron Eckhart, Rainn Wilson and Dustin Hoffman were among the male admirers who jokingly flirted with the Oscar nominee, while Best Director winner Julian Schnabel dispensed with formality and planted a kiss on the Spanish hunk as he presented him with his award.

"I love the Indie Awards!" declared Zach Braff, who received his first kudos as a filmmaker when his film Garden State took honors at the ceremony in 2005. Braff and Lisa Kudrow gave a delightfully dizzy introduction to this year's Best Cinematography category.

"I love making the movies that I want to make," said Jada Pinkett-Smith (in Yves St Laurent and Oscar de la Renta. "When people get in my ear and say, "Do you want this?" I say, "Hell no! We're doing it this way. Period." The sassy star-who was recently honored at the Essence Black Women in Film luncheon-chatted with Eva Mendes (in Calvin Klein) during a break in the action. 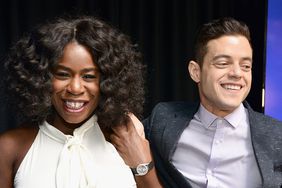