"Everybody's used to having relationships and fittings with designers of a certain prominence — and this shift has forced me to reflect on who I am and how I express myself through clothes."

The 2020 Emmys may not have had a red carpet, but that didn’t stop nominees from making a statement.

Several of last night’s nominees and winners took the Zoom spotlight as an opportunity to subtly highlight the Black Lives Matter movement — Regina King accepted her fourth Emmy in a T-shirt illustrated with Breonna Taylor’s face and a call to “Say Her Name” in all caps; Uzo Aduba received her third award in a T-shirt that bore Taylor’s name; and Yvonne Orji wore the outline of a Black power fist shaved into her hair.

Sandra Oh made a statement as well, but hers was perhaps less obvious (to those who do not read Korean, that is) but just as powerful. The 12-time Emmy nominee paired black flared pants with a purple KORELIMITED bomber jacket and matching mask embroidered with Korean text reading “Black Lives Are Precious” — “the literal translation of Black Lives Matter is impossible in Korean,” Oh told British Vogue. “The characters have to be read top to bottom, right to left, [a traditional way of writing Korean script] and there are dashes, or taegukgi, lifted from the Korean flag, which represent celestial bodies and the natural elements and all of that good stuff,” she explained. “And then on the right there’s a mugunghwa [hibiscus], the national flower of Korea.”

“After George Floyd’s death and the protests that followed, I felt that as an Asian-American, a Korean-American person, I wanted to express my support for the Black community in a way that felt personal to my community,” Oh told the publication. “Everybody’s used to having relationships and fittings with designers of a certain prominence – and this shift has forced me to reflect on who I am and how I express myself through clothes.” 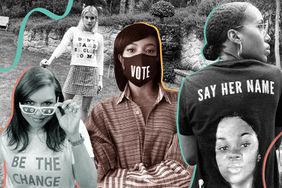 21 Celebrity Outfits That Perfectly Summed Up 2020