And, there's a chance they could be yours soon, thanks to an auction.

While a few actresses went with something fancy while others opted for cozy at the 2020 virtual Emmys, Rachel Brosnahan's outfit combined the best both fashion worlds — and then some.

The Marvelous Mrs. Maisel star wore pajamas for the at-home event, but her navy and purple set, which matched the one worn by her husband, Jason Ralph, along with bowties worn by their two dogs, was far from your average pair of PJs. The design was custom-made by famed tailor Christy Rilling, and also included graphics by artist Laurie Simmons. But the best part? It's going up for auction, and 100% of proceeds will benefit Michelle Obama's When We All Vote.

See All the Incredible Looks From the 2020 Emmys

"We thought, what a great opportunity to bring the entertainment and fashion communities together through the platform of the Emmys, advocating for something that's important to all of us right now, voting," Carineh Martin, co-founder of Red Carpet Advocacy (RAD), told InStyle. Since 2019, RAD has been working celebrities and designers to donate dresses and looks, which are then auctioned off in support of various charities and causes.

"Arianne [Phillips, RAD's co-founder] and I looked into a bunch of different voting organizations, and really loved the work that When We All Vote is doing in terms of educating people, from a grassroots level, about how to vote," said Martin. "It's really complicated and different from state to state. And it just so happens that Sept. 22 is National Voter Registration Day, so this week is the big push nationally to get people to register to vote or to check their voting status."

Brosnahan's pajamas, along with her Roger Vivier shoes and even a piece of jewelry, will be available to bid on from Sept. 23 to Oct. 2, through stylist Elizabeth Stewart's chic-relief.com. Plus, on top of potentially adding an Emmys outfit to your closet — whether it's the one worn by Brosnahan, or those from Kerry Washington and Issa Rae, who also donated their dresses — you'll be able to bid on over 20 looks from this year's Venice Film Festival, including Cate Blanchett's famous rewear.

As for why Brosnahan chose to go with Emmys pajamas, the choice is even further connected to the former First Lady.

"At the beginning of the pandemic, Christy created robes from deadstock fabric from past gowns she had made for Michelle Obama and donated 30% of proceeds to New York Food Bank," explained one of Brosnahan's stylists, Jill Lincoln, of the duo Jill and Jordan. "So that was kind of part of the inspiration for the pajamas, because Rachel said, 'I want pajamas' and we're like, 'Awesome!' She looked at some of the images from the robes that Christy had created, and unfortunately she liked one of Laurie's print that couldn't be recreated. So, [Laurie] made a special print."

The good news is, a limited collection of masks, bow-ties, and even a 'pooch head bow' featuring that same poppy print were also created to raise money for When We All Vote. So, even if you can't get your hands on some celebrity style, you can at least snatch one of those up at christyrilling.com. 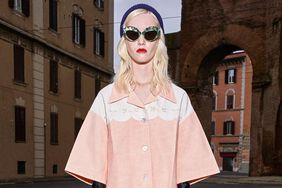