The Most Politically Charged Celebrity Moments from the 2017 Emmys

This year's Emmys in a word? Political. With Stephen Colbert hosting, and Saturday Night Live and The Handmaid's Tale up for multiple nominations, it was bound to be from the get go, but even so, we were treated to a night where celebrities got particularly candid about politics.

Whether it was Stephen Colbert kicking off the night with jokes about President Donald Trump, or the women from 9 to 5 talking about refusing to be controlled by sexist bigots, the stars of the 69th Emmy Awards held nothing back.

We've rounded up some of the most politically charged celebrity moments from this year's Emmys below. Buckle up before scrolling through—they'll likely be discussed for a long time to come.

When Colbert took the stage for his opening monologue at the Emmys, people expected he would get political, and boy were they right. The host made sure to point out that President Trump had "never won an Emmy" for his work on The Apprentice, which caused Trump to call the award show "rigged."

“Even during the campaign, Trump would not let it go. But he didn’t because unlike the presidency, Emmys go to the winners of the popular vote," he said. "He was nominated multiple times for Celebrity Apprentice, but he never won. If he had won an Emmy, I bet he never would have run for president. Trump is like Walter White. He’s just like Walter and much whiter.”

Also worth noting? Former White House press secretary Sean Spicer himself made a cameo, much to the shock and awe of the audience. It really can't get more political than that.

Alec Baldwin Won an Emmy for His Portrayal of Donald Trump

In one of the most overt political moments of the night, Baldwin accepted the trophy for Outstanding Supporting Actor in a Comedy Series, and he had a few choice words for Trump, whom he portrayed on Saturday Night Live. “I suppose I should say, at long last, Mr. President, here is your Emmy,” Baldwin began his speech.

“I always remember once someone told me that when you die, you don’t remember a bill that Congress passed or a decision the Supreme Court made or an address made by the president—you remember a song, you remember a line from a movie, you remember a play, you remember a book, a painting, a poem,” Baldwin said. “What we do is important, and for all of you out there in motion pictures and television, don’t stop doing what you’re doing. The audience is counting on you.”

The three leading actresses from 9 to 5 took the Emmys stage to a roaring standing ovation that only continued once they started sharing their thoughts on the state of the world. Fonda said that in 1980, women refused "to be controlled by a racist, egotistical bigot."

Tomlin jumped in, saying, "In 2017 we still refuse to be controlled by a sexist, egotistical, lying hypocritical bigot."

When McKinnon took the stage to accept the award for Best Supporting Actress in a Comedy Series for her work on Saturday Night Live, she quickly gave thanks to none other than Hillary Clinton for her "grace and grit." McKinnon impersonated Clinton on the sketch comedy show.

Saturday Night Live took home many awards on Sunday night, many of which spurred from the show's sketches about politics. So naturally, when Michaels himself took the stage, he referenced that.

"I remember the first time we won this award, it was after our first season in 1976. And I remember thinking as I was standing there, alone, that this was it. This was the high point. There would never be another season as crazy, as unpredictable, as frightening, as exhausting, or as exhilarating," he said. "Turns out, I was wrong."

Glover won two awards during the Emmys ceremony for his work on Atlanta (while also became the first black person to win an Emmy for directing a comedy, NBD), and while he was giving one of his acceptance speeches, he gave the president a shade-filled shout out.

"I want to thank Trump for making black people No. 1 on the most oppressed list," said Glover while accepting his second award for lead actor in a comedy series. "He’s probably the reason I’m up here."

While accepting her sixth Emmy Award for Best Actress in a Comedy Series for playing Selina Meyer on Veep (that ties her for most Emmys won by an actor for the same role), Louis-Dreyfus couldn’t resist getting a little, well, political.

“We had a whole storyline about impeachment, but we abandoned that because we were worried someone else may get there first,” she said. 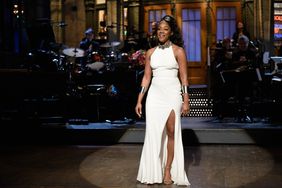