Orange Is the New Black’s Laverne Cox Takes You Behind the Scenes: See Her Emmy Diary

Orange Is the New Black’s Laverne Cox is already our beauty idol, and she's quickly gaining ground in becoming our style idol. After last night's Emmy Awards, where she looked Aphrodite-emerging-from-the-surf gorgeous in a snow white Marc Bouwer gown, the actress generously shared her Emmy diary with InStyle for a behind-the-scenes glimpse at her glamorous day.

How did the OITNB star de-stress before the excitement started? How did her glam squad create the head-to-toe fabulous look? Which stars did she bump into at the after-party? Laverne answers all those question (and then some!) and shares an exclusive peek at her experience at the Emmys.

Read on to get all the details of her wow-worthy look, the after parties she attended, and how her glam squad made her red-carpet-ready in Laverne Cox's Emmy Diary!

Orange Is the New Black's Laverne Cox was a vision on the 2014 Emmy Awards red carpet. Her talent earned her an Emmy nod, but it was her sublime style that landed her on all the Best Dressed lists the next day! From her morning workout to the after-party, go behind the scenes with the flawless star as she shares her Emmy Diary with InStyle.

"Working out is something I need to do more of," the busy star confessed as she hit the gym the morning of the Emmys. "It helps with de-stressing. Whenever I can start my day with a work out I have more energy and can manage the day better."

Getting the Hair Right

When Laverne's gown concept was confirmed, she decided with her hairstylist, Ursula Stephen for Motions/Epiphany Artist Group, Inc., that an updo was needed. Cox had previously never worn her hair up on the red carpet so Stephen created a style that would give the illusion of it being down. The updo featured neck-hugging tresses—created by Stephen in response to Laverne's request to be "ethereal."

Cox’s makeup artist, Deja Smith, is a part-time showgirl so she knows how to bring the glam! We got a glimpse of the glitzy palette she prepared for Cox's Emmy night.

Cox teamed with illustrious designer Marc Bouwer to create a crisp, white draped gown with a low back and two-tiered cape train fit to embody the modern day fashion goddess he considers the actress. He designed and draped the gown directly for her statuesque form at his New York City studio.

Cox wears a larger-than-average size shoe so all her shoes are sourced and custom-made from Europe and elsewhere (lucky girl!). She aspires to develop and design a shoe brand that will cater all women including those who wear a size 12 and bigger. She believes all women deserve beautiful, stylish heels, flats, and boots even if they fall outside the average size range.

Stylist Christina Pacelli was waiting for the right red carpet for Cox's first white moment; it became apparent during working sessions with Marc Bouwer that would be the Primetime Emmys. Pacelli then collaborated with jeweler Fred Leighton to distinguish the perfect multi-karat diamond dress clips that were sewn onto the collarbone of the gown. A matching vintage bracelet and earrings set with aquamarine ring flanked by diamonds completed the look with a dainty Swarovski clutch.

Ready for the Ball!

Bedazzled and dazzling, Cox poses in full princess regalia one last time before heading out to the red carpet.

With her smoky eye perfected, gown draped impeccably, and every hair in place, Cox snaps a calm-before-the-storm moment in her limo as she rides to the Emmys.

The statuesque beauty hits the red carpet to talk to Extra's Mario Lopez and Tracey Edmonds, giving us a glimpse of the exquisitely draped back of her fit-for-a-goddess Marc Bouwer gown.

After the ceremony, Laverne headed to her hotel for a quick outfit change before hitting the after parties. She may have traded draping for lace, but she still looked like a shining goddess in her shimmery Marchesa dress and clutch, Neil Lane bracelets, Paul Morelli earrings, Fred Leighton ring, and Stuart Weitzman shoes.

Cute couple alert! Cox sidled up to a bearded Jon Hamm. Is it too much to hope that Hamm appears as a Litchfield guard next season on Orange Is the New Black? 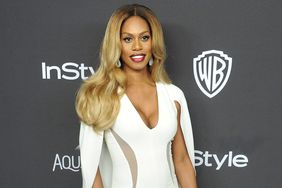 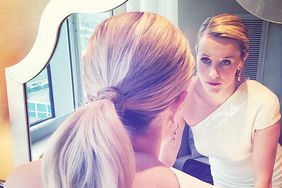 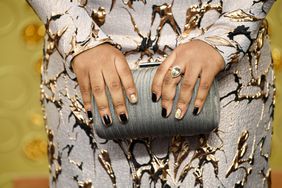