Emmys 2014: Here Are the Best Beauty Moments of the Night

Television’s leading ladies certainly didn’t disappoint on the Emmys red carpet—especially when it came to their gorgeous hair and makeup. Much like the pros predicted, neutral palettes were a popular choice for stars like Julia Roberts and Kerry Washington, who kept the focus on her smoky eye with nude lips and cheeks—even Gwen Stefani gave her signature red lip a night off and opted for a pale pink. Of course, no awards show would be complete without a touch of old Hollywood glam. Just take it from January Jones (above), who gave her ’50s-inspired look a bit of edge with a textured updo.

But those weren't the only memorable beauty moments of the evening—we gathered our favorite chignons, blowouts, smoky shadows, and more, complete with tips from the hairstylists and makeup artists who created each look. Click through our gallery now to see them all!

In lieu of her trademark red lip, Stefani stuck to rich neutral tones, incorporating warm metallics on her eyes and a sheer, glossy pout. A swipe of terracotta blush gave her milky complexion a sun-kissed finish. The final touch was a sleek, center-parted blowout, which mirrored the graphic effect of her Versace gown.

Cox complemented her ethereal Marc Bouwer gown with a dramatic beauty look for her first-ever Emmys appearance. Enlisting the help of makeup artist Deja Davenport and hairstylist Ursula Stephen, the Orange Is the New Black star hit the red carpet with a romantic updo and subtle smoky eyes-not too shabby for Litchfield’s resident hairdresser!

To achieve Bowen’s flirty bob, hairstylist Adir Abergel drew inspiration from the star’s breezy Peter Som gown. “I really loved the lines of her dress, loved how it felt a little bit bohemian but with beautiful structure and lines,” he tells us. For a “new modern, lived-in texture,” Abergel applied Neutrogena’s Triple Repair Leave-In Conditioner ($6; ulta.com) from roots to ends, rough drying hair until 80 percent dry, and finishing with a round brush to add volume and smoothness. Once hair is smooth, Abergel suggests curling hair away from the face with ¾ inch curling iron, leaving ends out so “they have a life of their own.”

Some stars may get a fresh blowout before hitting the red carpet, but Kerry Washington went for a full shade-swap! “When I saw Kerry, she just looked so young and fresh to me, that I instantly thought of color and wanted to make her hair lighter,” says her hairstylist Takisha Sturdivant-Drew. “I lightened her hair to a red color, medium brown, light brown, and kept her hair on top dark.” She then added a dime-sized amount of Neutrogena’s Triple Repair Leave-In Conditioner ($6; drugstore.com) to Washington’s ends, then used a round brush to blow dry her strands smooth. The star’s makeup artist Carola Gonzalez drew inspiration from her gown’s navy blue under-layer to create her smoky blue eye. “It was a very beautiful blue, and we agreed on complementing that with dynamic eyes,” she tells us. “With the eyes being the center of attention, I decided to go with a nude beige on her lips, and Neutrogena’s Warm Caramel Color Stick ($9; drugstore.com) was the perfect shade.”

With the House of Cards star preferring a more minimal look for the red carpet, makeup artist Tricia Sawyer focused on Wright’s complexion. To ensure her skin would stay well-moisturized (and that makeup would stay put throughout the night) Sawyer prepped with Orlane’s Super-Moisturizing Light Cream ($165; orlane.com). She then applied the brand’s Absolute Skin Recovery Care Eye Contour ($125; neimanmarcus.com) beneath the eyes, followed by a light coat of Chanel’s Vitalumiere Aqua ($45; chanel.com) and a touch of concealer. To make Wright’s eyes pop, Sawyer applied eyeliner, individual eyelashes, and two coats of Orlane’s Volume Care Mascara ($40; orlane.com). “This mascara is great because it doesn’t flake at all which is super important,” she says.

Mara played off of the inky noir detail of her J. Mendel dress by tracing her eyes in rich black liner, then added extra dimension with a touch of silver shadow and a pale nude lipstick. Her hairstylist Mara Roszak contrasted the polished effect by incorporating loose, beachy waves into her layered bob. “Her hair was all about shape and texture,” she says. “I cut it shorter creating a choppy, slightly A-line look.” After a spritz of L’Oreal’s High Lift Creation Spray ($6; ulta.com), Roszak rough-dried her hair to keep the volume intact, then wound sections around a medium-barrel curling iron for additional movement. She then added a veil of L’Oreal Elnett Extra Strong Hold ($15; ulta.com), and to separate her ends, Roszak worked in a small amount of the TXT It Hyper Fix Putty ($4; target.com).

True to her Mad Men character Betty’s classic tastes, Jones’ hairstylist Renato Campora used Grace Kelly as his muse for her low updo, amping up the texture to give the look a current edge. He began by applying Vidal Sassoon’s Pro Series Mega Firm Hold Gel ($6; drugstore.com) to her wet hair as a base, then rough-dried using his hands to bring out her natural waves. Once her hair was dry, Campora added another dollop of gel, parted Jones’s strands into two sections, and twisted the first from the left side above her ear toward her neck. He repeated the motions on the other side, then used a hair tie to anchor the two twists at her nape. A statement red lip, created with Chanel’s Rouge Allure in Coromandel ($35; chanel.com) mirrored the bold hue of her Prabal Gurung gown. “I was inspired by classic 1950s beauty with a little bit of an edge,” adds her makeup artist Rachel Goodwin. “Her dress had a dramatic ‘50s couture feel with very modern details, so I decided to take my direction from that.”

Dockery opted for a low-slung chignon on the red carpet with pieces falling around her face for a soft, whimsical feel. “Michelle wore a one of a kind gown by a Brooklyn designer,” Mara Roszak tells us. “I chose to highlight the classic ease of the dress by creating a beautiful, effortless bun parted in the middle for a cool, modern feel.” When it came time for makeup, Jordan Long drew inspiration from a ‘60s Audrey Hepburn, giving the Downton Abbey star a retro feel with a subtle cat eye and glossy nude lips.

Orange may be the new black, but for Taylor Schilling’s sexy smoky eye, her makeup artist Tina Turnbow stuck to soft neutrals and earthy browns. “We wanted the look to be ethereal and angelic, so I opted for a sultry eye with splashes of brown and copper, with glowy, beautiful skin,” she says. Picking up the Laura Mercier Caviar Sticks in Cocoa and Moonlight ($28 each; lauramercier.com) she applied the darker hue all over, then blended it outward to shape the dramatic wing. The lighter hue was placed along Schilling’s inner corners for an open-eyed effect, and after a touch of the Sateen Eye Color in Cognac ($24; lauramercier.com) on her brow bone, Turnbow smudged the Kohl Eye Pencil in Brown Copper ($24; lauramercier.com) along the star’s upper lash line before adding a few coats of mascara. In lieu of a lip brush, the pro dabbed Laura Mercier’s Weightless Lip Color in Sin ($25; lauramercier.com) onto Schilling’s pout to impart a just-bitten appearance. Her hairstylist Richard Marin looked to the ‘60s to inspire the star’s windswept updo, and after applying a touch of L’Oreal’s Boost It Volume Inject Mousse ($5; ulta.com) to her wet strands, he blow-dried and smoothed out any kinks with a flat iron. Marin pulled her hair into a low ponytail, then twisted it into a messy chignon, allowing a few face-framing tendrils to peek out.

Aiming for a vintage vibe, hairstylist Sallie Nicole used 1-inch curling iron to create waves and texture throughout the star’s hair. She then grabbed pieces section by section, using bobby pins to achieve a secured yet loose updo. As for her eye makeup? “For this one of a kind dusty rose Burberry dress, we wanted to balance the sweetness with a strong eye, through sticking to feminine shades of pink that were still cool and modern,” Deeley’s makeup artist, Amy Strozzi, tells us. To do so, she layered Clinique shadows, including the darker shade of the brand’s All About Shadow Strawberry Fudge Duo ($20; clinique.com) all over the lid and crease, and Ballet Flats ($15; clinique.com), a soft nude pink, under the brow arch and in the corners of the eyes to highlight. 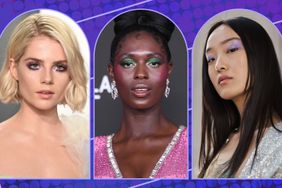 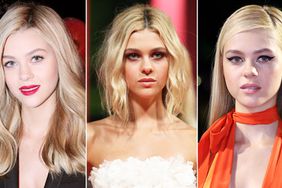