Celebrities decided to match the red carpet at this year's Emmy Awards as they stepped out in floor-sweeping, crimson gowns. The pull of these looks is that the small-screen stars didn't go for simple shades-instead, they opted for red tones that were full of detail. January Jones' printed Prabal Gurung dress featured black insets and Sarah Hyland went for chic separates with a full-skirt-and-crop-top combo by Christian Siriano while Claire Danes' elaborate Givenchy neckline and lace insets also fit the bill.

Bright colors popped up on the red carpet at this year's Emmy Awards. Michelle Dockery stunned in a voluminous Rosie Assoulin gown while Girls' stars Lena Dunham and Allison Williams both wowed in Giambattista Valli.

White is proving to have serious staying power as Kristen Wiig, Kate Mara, and Sofia Vergara all lit up the red carpet in icy-white hues. Wiig opted for a crisp cut Vera Wang gown with a thigh-high slit, Kate Mara worked a draped and pleated number, and Vergara sizzled in a figure-flattering Roberto Cavalli column.

Super shiny metallics were reimagined for the Emmy Awards and instead of their usually show-stopping sheens, they turned up soft and subtle. Amy Poehler worked a silver Theia gown, Hayden Panettiere shimmered in a plunging Lorena Sarbu column, and Taylor Schilling wowed in champagne-hued halter neck gown. 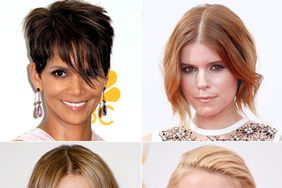 Pucker Up! Here Are the 18 Best Lipsticks of the Emmy Awards