Just hours after landing at Charles de Gaulle airport, Victoria Beckham was the center of attention at a party celebrating the opening of pal Roberto Cavalli's flagship store on Avenue Montaigne in Paris.

After taking in the catwalking at the Chanel show, Kirsten Dunst caused a minor frenzy as she made her exit. Lily Allen, Jennifer Morrison and Claudia Schiffer were among the other fashion forward ladies scouting Karl Lagerfeld's designs from the front row.

After hitting the French boutiques with sister Mary-Kate, Ashley Olsen went on a solo mission to attend the opening of David Lynch's Fetish photo exhibit at the Galerie du Passage, where she mingled with Sofia Coppola and designer Diane von Furstenberg.

Just two days after his performance on the season premiere of Saturday Night Live, rapper Kanye West landed in Paris where he joined girlfriend Alexis Phifer-who designs a line of clothing called Ghita-in the front row for the Vivienne Westwood Spring/Summer 2008 ready to wear show.

and wife Trudie Styler got into the spirit of the Paris fashion show with designer John Galliano at the unveiling of his Spring/Summer 2008 ready to wear collection for luxe label Dior.

smiled for the cameras as she arrived for the Givenchy show in Paris. Once inside, Love posed as Kanye West (not pictured) snapped some pics from the front row.

Designer Stella McCartney got some support from pop Sir Paul McCartney backstage before the unveiling of the Spring/Summer 2008 collection from her eponymous line in Paris. 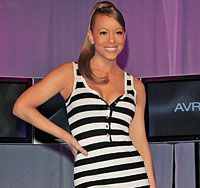