She's nominated this year for her take on Pamela Anderson.

One of the biggest questions tonight is whether or not Lily James will take home an Emmy Award for her star turn as Pamela Anderson in Hulu's Pam & Tommy, which earned her a nomination for Outstanding Lead Actress In A Limited Or Anthology Series or Movie. What was never doubted? The fact that the actress would arrive and steal the spotlight, no matter what she wore.

James did just that by walking the gold carpet on Monday night in a bronze Atelier Versace chainmail gown complete with branded straps, glamorous draping across the waist, and a bustier-style neckline. Multiple gold bracelets, tiny matching hoop earrings, and a brown manicure completed the star's look, and she wore her brown tresses in loose waves parted down the middle — a far cry from her on-screen persona's platinum blonde locks.

"I'm so proud because we were really in it together and felt so joined in our ambition to really try and do something with this," James said of working with co-star Sebastian Stan, who is also nominated for an Emmy Award for his role as Tommy Lee. "So, I'm so happy and so thrilled we're both in this mad situation. It makes it way better."

Off the red carpet, James is no stranger to the fashion world. After she made headlines again with her portrayal of blonde bombshell Pam Anderson, she swapped those prosthetics, blonde hair, and pencil-thin eyebrows for a high fashion makeover. Donatella Versace enlisted James to star in a Versace campaign for Fall/Winter 2022 that had her swap her go-to natural no-makeup makeup looks for a shaggy, dark haircut, blunt, straight-across bangs, and barely there eyebrows. 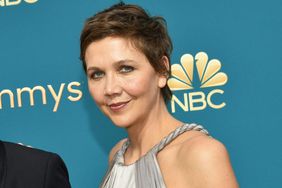 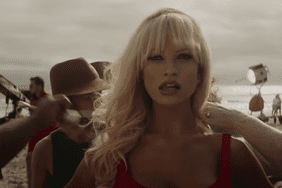