New York Fashion Week began on Wednesday with a new high, and also a new low.

Now, if you’ve been following along on social media, and chances are that you have, you will already know exactly what I am talking about. Tom Ford and Kanye West.

One is an immaculate professional in the prime of his multifaceted career, with the vision to deliver a fashion statement that is perfectly suited for our times. So is the other, strangely enough. But which one you choose to hold in high esteem or low regard (and ultimately the one to whom you give your hard-earned cash dollars) likely hews closely to the degree that your worldview on fashion is informed by the editorial elite and its chattering classes of privileged insiders, or rather, the internet and its indiscriminately determined influencers of popular culture.

Heck, who am I to judge? Standing in the hot sun for about an hour on Roosevelt Island before Kanye’s Yeezy Season 4 show, being harassed by faux cops (what is the Roosevelt Island Public Safety Department, really?), flipping out as a metal barrier was dropped upon my leather loafer, and at one point being threatened with arrest for being argumentative (truly, this did happen), it occurred to me that I do not wish to spend one more moment of my life venting about Kanye West’s fashion collections.

At the same time, I recognize the public’s interest in a good old-fashioned fashion train wreck. So I will not deny you the satisfaction of knowing that this one was spectacular, complete with fainting models, torturous shoes, and disorganization that would rival JFK on bring-your-guns-to-the-airport-lounge night. Judging by comments on the live stream from those of you watching at home, I suspect that any goodwill toward West’s design ambitions had all but evaporated following his misguided casting call for “multiracial only” models, whatever that meant. It was no clearer after the show. All anyone could see was the same sad old clothes, and enough already with the Vanessa Beecroft lingerie stadium-staging.

At the same time, I want to emphasize that West, inadvertently no doubt, does a great service to fashion by so effortlessly exposing its hypocrisies. His designs are clearly influenced by the rise of the Paris anti-fashion label Vetements, which sends editors into orgasmic fits for being ironically derivative of luxury labels, and yet it is chic to dismiss West for the doing exactly the same. These generic clothes (T-shirts and sneakers, especially) are sold and re-sold for shocking sums around the world, driven by our unending fixation on fame, followers, and any possible thread of hope that we, too, can be celebrities by owning just a piece of Kanye. What other fashion show had a gift shop?

Speaking of fame, it is fair to point out that Tom Ford is pretty well known. In fact, you could say that at least a modicum of his success has to do with the fact that he recognized the value of self-branding well before it became an industry. Arriving at his show last night, an oasis of fabulousness, no stanchions in sight, cocktails and dinner on hand, and celebrities just dying to say hello and offering to get me a drink, I stopped Ford and congratulated him on his interview in WWD that day, in which he expressed something we’re all feeling: “I think I’m less desperate about fashion.”

That’s true. What we want is a reason to buy, to be seduced. And that’s why Ford decided to hold his collection back from press previews this season until Wednesday night, shown when it was simultaneously available in stores. With a flashback feeling of flared pants and glittering disco gowns, crazy perms, and sensational buckled leather belts and shoes, he gave his best argument to consumers. In his own respectful way, Ford bypassed the traditional system of critics and editorial establishment, counting on social media and press coverage of the show to excite a burned-out luxury audience.

Men’s and women’s wear shared a runway that was filled with clothes for fall (unfortunately on a very hot night in New York). They were smart, especially the sparkling shearling coats and, oh!, the shoes, buckled with condensed heels that look nothing like what’s already out there.

Not even fast fashion can keep up, so if you want the look now, follow Ford.

“I’ve got to get that white suit,” Russell Westbrook, the NBA player, told me on his way out for the night. 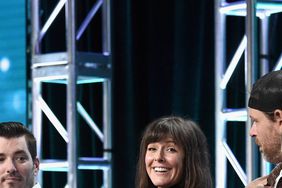