Gurung was once told he had no right to define what America ought to look like. Well, he just did.

“Who gets to be American?” Prabal Gurung asked at the end of his New York Fashion Week runway show that marked the 10th anniversary for his brand. Models made their final walk wearing pageant-like sashes bearing that question, while floral arrangements filled with different countries' flags hung from the ceiling above the crowd.

The messaging in this show isn't a one-off attempt to grasp at the political vibrations of 2019; Gurung has been instilling his runway presentations with pointed statements since 2016, with increasing fervor in the years since Donald Trump became president. In 2017, he released a collection of T-shirts with quotes from feminist leader Gloria Steinem; messages like “Our bodies. Our minds. Our power,” “This is what a feminist looks like,” and “We will not be silenced.” The shirts became part of a larger movement that blurred the line between political statement and fashion statement. In many ways, like any form of activism, this overhauling shift could have been a risk for his brand. The backlash from buyers and customers who may not agree could have put his business in a compromised position. Instead, he continues to find a customer base for his values-focused brand, as his messaging becomes an ever more central part of its DNA.

In the notes for this show, Gurung, who was born in Singapore and moved to New York 20 years ago, explained his decision to make Spring/Summer 2020 about immigration. “This is all deeply personal to me,” he wrote. "Though my roots lay with my family in Nepal, this country is my home. America is where my heart is. I am an American.”

He continued that he wanted to create an ode to the American Dream that he still deeply believes in. “In the last few years, incited by the divisive rhetoric of our current administration, I’ve considered the many faces of America and how we should seek to redefine it. I recall sitting in a business meeting spiritedly challenging this very notion, and being met with a pointed ‘well you don’t look American, so how can you define what America is?’”

So that’s exactly what he did with the collection. His spin on traditional Americana was smart and youthful. He took pieces like raw denim cargo pants and paired them with long strands of pearls and cowboy boots, creating a tangible metaphor for who can be or wear these iconic American classics. This melting pot theme was also displayed through a diverse cast of 60 models (on the axes of age, race, and size), including Paloma Elsesser, Lindsey Wixson, and Manuela Sanchez. At the show's end, a dreamy cover of Simon and Garfunkel’s “America” played as the models walked down the runway wearing tie-dye dresses. It harkened back to a time in the United States when peace and change — thanks to an empowered young generation — became urgent subjects of conversation, one Gurung seems to want to see again in 2019. In the end, the collection and show were exactly as intended: beautiful and celebratory, but also solemn and reflective.

VIDEO: Prabal Gurung New York Fashion Week: Who Gets To Be an American?

The show was originally supposed to be held at New York City’s Hudson Yards, but at the last minute, Gurung changed course. He explained that he didn’t want to support Stephen Ross, who is the chairman and majority owner of The Related Companies (which owns Hudson Yards), and a financial supporter of President Trump. His wife Kara Ross, a member of the CFDA, was also criticized for cohosting the Trump fundraiser with her husband. “A company of this size, resources, and reach has the potential to make a massive and positive impact on our community, and is instead, putting its efforts into fostering an unsafe culture,” he tweeted, in August.

As Gurung moves into the second decade of his career, he’s proven that he sees his platform in fashion as a responsibility and continues to use it to give a bigger voice to people who may not be able to. This season, his message was loud and clear. 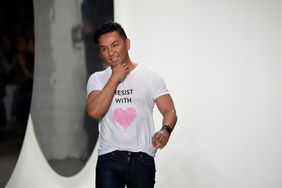