Fashion Month has finally come to a close, and what a month it was. From New York to London, Milan, and Paris, designers made statements on the runway with both their stunning FW17 collections and their choice of models.

While fashion week heavy-hitters like Kendall Jenner, Gigi, and Bella Hadid hit many a catwalk, they weren't the only big faces to grace the runways. Legends like Naomi Campbell and Amber Valletta had supermodel moments in New York and Paris, 75-year-old fashion designer Vivienne Westwood took a spin down her own runway, while Ashley Graham made history by becoming the first non-straight size model to grace the Michael Kors show.

From over-40 models to ex-convicts, this fashion month celebrated diversity in a major way. Keep scrolling for all of the runway walks that made jaws drop in the front row.

The model went mod for Chanel in a black and white houndstooth jumpsuit and sparkly, cap-toe boots. Tall, teased hair and dramatic lashes emphasized the retro look, while space-inspired gloves and a crossbody bag brought it up to modern day.

The younger Hadid sister looked ready for a trip to Mars in an embellished dress, matching headband, and glittery boots.

Jenner looked every part the '60s girl in a tweed coat with plush trim and a wide headband pulling back her teased locks.

The 75-year-old fashion designer took a spin down her own runway during Paris Fashion Week in a fun printed dress over green pants, but the best part was her pink hair extensions and colorful makeup.

Baldwin wore the ballet-inspired dress of our dreams at Elie Saab.

The 43-year-old model walked her third runway during Paris Fashion Week on Thursday, radiating in an office-appropriate look for Isabel Marant.

Hadid shimmered on the Isabel Marant runway in a ruffled top and polka-dot pants.

The up-and-coming model landed a major gig for Off-White, rocking the brand's Paris runway in a cropped sweatshirt and blue mini.

Hadid managed to show a ton of skin in this buttoned-up look for Off-White, baring her abs in a cropped tweed jacket, matching high-slit skirt, and boots.

Jenner looked gladiator chic at Balmain in a reptilian slit dress over leather leggings and peep toe boots, but the most surprising part of the ensemble was her makeup. The model looked almost unrecognizable in tight braids, black graphic liner, and a piece of gold jewelry on her lips.

Hadid wore 50 shades of black for Balmain, in a sheer bandage top and mini skirt paired with thigh-high suede boots and the same bold makeup look as Jenner.

The sisters stormed the runway hand-in-hand at H&M, coordinating in chic all-black ensembles while Bella's ex, The Weeknd, performed on stage. Hey, happiness is the best revenge.

Harlow made a grand entrance at PFW during H&M's Studio show, smiling her way down the catwalk in a "love" skirt.

The over-40 model kicked off Dries Van Noten's age diverse show, returning to the designer's 100th runway after making an appearance at his very first show.

The 42-year-old looked fresh-faced at Dries Van Noten, rocking the runway in a printed sheath and white boots.

40-year-old Warsame radiated in an iridescent blazer and cuffed jeans.

The 40-year-old model glowed with minimal makeup in a black turtleneck and bold printed pants.

Valletta, 43, walked two runways in one day at PFW, stunning in two looks at Dries Van Noten before walking in the H&M Studio show.

The model kicked off her run at Paris Fashion Week in a sheer lace top, black cigarette pants, and a feather-embellished coat at Lanvin.

The model masterfully mixed prints at Missoni in a plaid coat and printed dress. Minimal makeup and soft waves balanced out the vibrant look.

Smalls looked fierce for Bottega Veneta during MFW in a maxi dress and cape coat.

Jenner rocked yet another all-black look this fashion month, this time going dark for Bottega Veneta.

The new mom made a surprise return to the runway at the Versace show during Milan Fashion Week in a hooded navy blue minidress, matching heels, and voluminous orange coat.

The younger Hadid sister went edgy for Versace with red extensions in her ultra-dark locks. Heavy liner on her lids and a sharp contour on her cheekbones polished off the look.

The 21-year-old's blonde locks were filled out with neon yellow streaks at the Versace show in Milan. Hadid strut down the runway in a plunging black dress with a thigh-high slit.

The model was almost unrecognizable at the Moschino show during Milan Fashion Week in a blonde bouffant, winged liner, and a sheer illusion gown.

The 20-year-old was giving Gatsby vibes in a sparkly mini, fur coat, and dramatic updo—fringe included.

Jenner's look was one part party, one part boardroom at the Moschino show in a black pantsuit with a reflective lapel, paired with a '60s 'do. The model dragged a fur coat behind her as she strut down the runway.

The model—still wearing her beehive hairstyle—channeled a cardboard box on the runway, complete with "fragile" stickers and postage stamps.

Little sister Bella followed suit in a coat, boots, and pillbox hat that made a major statement.

Jenner, too, was all wrapped up on the runway in a packing tape-wrapped skirt suit with a cardboard box for a hat.

The model went mod for Fendi in a monochromatic red look, from her round sunglasses and hoop earrings to a luxe coat, leather shoulder bag, and pointed-toe boots.

Those boots were made for walking, and Bella pulled them off too. The 20-year-old looked chic at Fendi in a shirt dress, black blazer, and thigh highs.

The hijab-wearing model fit right in at Max Mara in a monochromatic beige look.

Red is definitely having a moment at MFW, as Gigi was sent down the aisle at Max Mara in fire engine red from head to toe.

The masked crusader made her way down Alberta Ferretti's runway at Milan Fashion Week in a totally sheer dress and velvet floor-length cape.

Bella wasn't the only Hadid on the runway at Alberta Ferretti: Her big sister made multiple stylish trips down the catwalk, including one in a black gown with a ruffled shawl.

The newly-signed IMG model continued her time in the spotlight, walking Alberta Ferretti's runway in Milan in a black hijab, coat, and pants.

Maxwell was a vision in white at Topshop Unique.

Aboah closed the show and freed the nipple at Topshop Unique.

The Hadid sisters are on a roll this Fashion Month and packed a one-two punch opening Versus Versace in London.

To bring things full circle, Bella dazzled as she closed the Versus Versace show in London.

The model rocked a bucket hat and fur coat while walking the outdoor runway at Marc Jacobs.

After signing with IMG, the hijab-wearing model made her New York Fashion Week debut at Yeezy Season 5 in a fur coat.

Jenner looked office-ready at RL in an off-white blazer, button-up blouse, and slacks.

Hadid popped up on the Ralph Lauren runway in a burnt orange zip-up dress with an asymmetrical hemline.

The gang was all in appearance for Anna Sui, where Gigi, Bella, and Kendall wore baby buns and wild prints.

The runway rockstar wore a very different look than she did at Ralph Lauren with bold shadow, a red lip, and graphic prints for Anna Sui.

Hadid mixed velvet and fur in bright hues for Anna Sui, following her big sis down the runway.

Graham walked Michael Kors in a belted dress with a thigh-high slit and gray fur coat. The 28-year-old’s appearance may mark a potential shift for the designer, who had previously never used curvy models in his runway shows.

Surprisingly, Jenner has been a rare sight to see at NYFW, but her fringe strapless number at Michael Kors was worth the wait.

The model with down syndrome launched a design label, 21 Reasons Why By Madeline Stuart, and showed off her collection on the runway during fashion month.

The 20-year-old strut her stuff at Brandon Maxwell in a red carpet-ready dress.

Kendall Jenner's BFF is becoming a major model in her own right, looking fierce on the runway for Zadig & Voltaire.

Gigi and Bella's little brother had a major NYFW moment of his own at Zadig.

The "hot felon" who made waves with his mugshot stormed the runway for the Philipp Plein collection during NYFW.

Once again, J.Crew made headlines by using "real people" as models for their fashion week collection, including this silver fox.

Kendall was in all black everything at Alexander Wang while little sister Kylie looked on from the front row.

Hadid's tee at Prabal Gurung made a major statement.

Supermodel alert! No one rocks lingerie quite like Naomi Campbell in La Perla.

It wouldn't be fashion month without a Kar-Jenner freeing the nipple, and Kendall managed to get it done on Day 1 at La Perla.

The socialite returned to NYFW in a big way—wearing a massive crown on the Christian Cowan runway.

The model kicked off fashion month in Los Angeles when she debuted her collection with Tommy Hilfiger on the runway in "Tommyland." 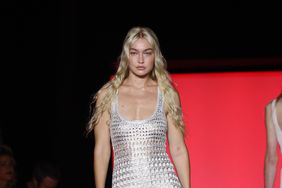 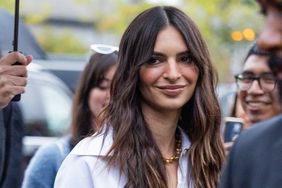 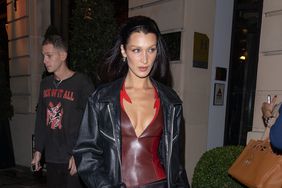 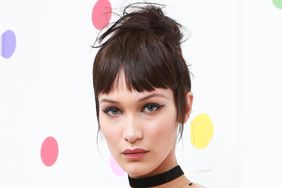 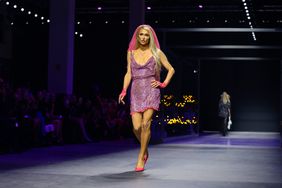 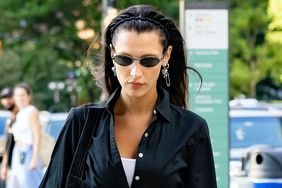 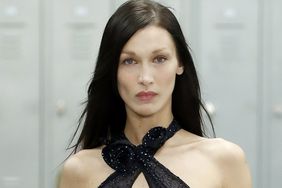