How Many People Does It Take To Make a Couture Dress?

Yesterday in Paris, Pierpaolo Piccioli sent his Spring/Summer 2018 couture collection down the runway. The pieces took a breather from the typical uber feminine dresses he shows and instead, appeared modern and almost utilitarian (a fun sentiment when you add the most amazing feather hats ever). It was “a Haute Couture of present times,” the brand said in a press release.

One non-everyday piece that veered more traditional couture was a stand out red dress (how Valentino of them). The dress, “Floriana” is a celebration of the House of Valentino. Made entirely by hand (it’s couture, baby!), the dress was created using a technique known as pagine—which translates to mean “pages.” “The effect is that of the slightly offset superposition that can typically be found in the pages of an open book or between the petals of a flower,” the brand tells InStyle.com exclusively.

The dress, made entirely by hand by six seamstresses from a light organza, has more than 375 Valentino-red scallops. Chic. 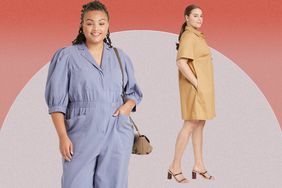 There Are 300+ New Clothing Arrivals at Target, but These Are the Only 10 Things You Need to Buy