Who knew sweet pastels could pack so much punch? Karl Lagerfeld, for one, made sure that was the case when he transformed Paris's Grand Palais into a room lined with mirrors for the Chanel Couture show, where show-goers got to take in tweedy power suit sets, high-shine gowns, and one stunning bride at literally every single angle. The theme, it seemed to be, Coco Chanel-approved elegance encased in unapologetic glamour.

And there was, by any means, no shortage of star-studded moments, either. Bella Hadid and Kendall Jenner both made laps, while Lily-Rose Depp was given the honor of closing the show in a blush pink wedding dress resplendent in its grandeur. Scroll through to see the nine most memorable, slash prettiest, moments from the Chanel Haute Couture spring 2017 show. (And if you haven't already, here's how you can see every look from the collection.)

The Grand Palais was transformed into a mirror-lined set, where every pretty one-of-a-kind creation was seen (and reflected back) from all angles.

Bella Hadid and Kendall Jenner gave the runway some It-girl star power. Both were clad in navel-plunging embellished couture creations.

Are anklets back? Karl Lagerfeld is making them a thing again when he topped iridescent pumps with a strand of pearls.

Metallic square-buckle belts encircled the waist of nearly every model.

Pot pie hats seem suddenly irresistible when made over in Chanel tweed.

High-shine bead embellishment was carried over from the dress all the way down to the boots, which created a streamlined effect.

The honor of the bride was bestowed upon forever muse Lily-Rose Depp, who wore a tiered ruffled pink wedding cake of a dress.

Vanessa Paradis in the Front Row

Lily-Rose Depp's number one fan? Mom Vanessa Paradis, who cheered her on from the front row. Other stars in attendance: Olga Kurylenko, Liu Wen, and Ellie Bamber. 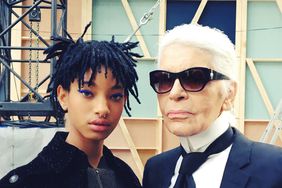 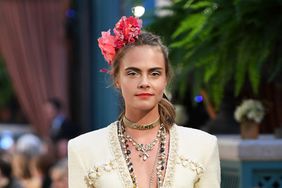 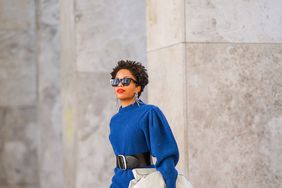 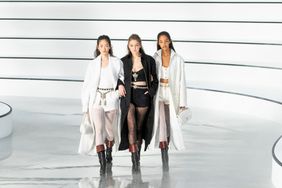