Coppola-who has played a muse to Marc Jacobs in his role as Louis Vuitton's Creative Director-stepped out to support Jacobs' eponymous designs, too.

Cyrus worked a Rachel Zoe pantsuit at the debut of the designer/stylist's fall collection. "Love to the fabulushhhh @RachelZoe thank you for having me today! Can't wait to rock everything," Cyrus Tweeted with a heart icon.

The A-list actresses-both big Michael Kors fans-sat side-by-side in the front row at the premiere of the designer's fall collection.

Fashion Week MVP made it to another show! The actress took in J. Mendel, by designer Gilles Mendel, from the front row, admiring the lush velvet gowns made for the red carpet.

The youngest Olsen-and half of the inspiration behind Elizabeth & James-stepped out to see the latest looks from her designer sisters.

Matt Damon and wife Luciana Barroso are both close friends and adamant fans of designer Naeem Khan, and they posed backstage with Brooke Shields at his fall 2013 show at Lincoln Center. "It's lots of details, things molded to the body, and luxurious materials," Khan told InStyle.com before the show of his opulent creations that caused Damon's jaw-dropping reactions.

The actress attended Jenny Packham's Parisian salon-inspired fall 2013 show at Lincoln Center. When asked about her style, Heigl joked backstage: "I sort of fluctuate too much, and I love fashion so I will try things that don't necessarily work for me. I figure at 34 I probably need to define it a little bit."

Models Selita Ebanks and Petra Nemcova posed backstage at Badgley Mischka. "All the glamorous runways and red carpets are fun, but truly the most fun gratifying thing is when you see a woman who you don't even know in one of our dresses, and you can tell she's happy and she feels gorgeous," Mark Badgley and James Mischka told reporters backstage. "That's kind of what it's all about."

The three actress looked cozy in their front-row seat at Kaufmanfranco's very first runway show. "Some of the stuff coming out—especially the pantsuits—I felt like they were just power suits. There was something about them that was just very empowering and it's just very alluring," Greene told InStyle.com backstage. "There was a little Elizabeth Taylor and a little Jackie O."

The actress worked natural separates when she attended the presentation of Donna Karan's namesake collection for fall.

Celebrity stylist Brad Goreski looked cozy in a wool coat sitting front-row at Tory Burch's fall show at the Pierre Hotel. Scoping out the latest for his celebrity clientele?

Carolina Herrera invited her front-row guests to see her fall 2013 looks backstage at The Tents. Sims Tweeted a photo of her favorite white dress from the lineup with the caption: "Modern day wedding dress by Carolina Herrera! Love, love, love! Elegant and so chic."

star Katharine McPhee and supermodel Molly Sims snapped a shot together at Zac Posen's runway show. "This collection is about effortless dressing," Posen told InStyle.com. "Something you can zip into and put in and light up the room and be a Zac Posen star."

The One for the Money actress stood tall at Reem Acra in a black dress with a lace peplum, a look by the Lebanese designer. "Hanging out in New York during Fashion Week. Not bad, not bad at all! In fact... pretty darn good!" Heigl Tweeted.

The three actresses were all on-hand to support Alice + Olivia designer Stacey Bendet during her Paris-inspired Fall 2013 presentation. "It's just so versatile, so chic and fun and girly," Hudgens told InStyle.com of her love for the brand. "You can just mix it up whichever way you want!"

Moore and her director husband held hands while they waited for the lights to go down and the show to begin at Tommy Hilfiger. The designer explained: "This collection is really about Saville Row meets Ivy League prep. I would say that it's a mix of menswear patterns done in feminine silhouettes."

A meeting of the famous Dianes! Sawyer headed to The Tents for the biggest news of the week-Fashion Week!-then headed backstage at DVF to give her designer friend a hug.

Diane von Furstenberg named her fall collection "Life of the Party"--and it looks like these ladies got the memo! No one could miss Vanessa, Katharine, or Shay in their eye-popping ensembles.

Small screen star alert! Mitchell, Justice, and Roden all took a break from their busy filming schedules to take in Donna Karan's latest DKNY collection, a neutral palette accented by rosy hues. ""Loved the whole show from head to toe dkny and the music!!! I'm definitely getting that mix," Mitchell Tweeted.

Celebrity stylist Brad Goreski posed with his client Christina Ricci as they sat front row at Thakoon's show, which was held at the Dia Art Foundation. Goreski Tweeted a photo of the two of them soon after the show with the caption: "I love this photo!"

The designer and her supermodel friend paused and posed behind-the-scenes at The Tents. Elaborating on her bomber-filled fall collection, Minkoff said to InStyle.com: "I did all this research about Amelia Earhart and I got really excited about flight suits! All those details that you could apply to a garment."

Fashion Week pro Jaime King joined Prabal Gurung's Target muse Olivia Thirly at the launch of Gurung's ready-to-wear fall collection, sponsored by FIJI Water. "I love the way that he is inspired to take art and turn it into something you can wear on your body. I love his lines and his prints, and just his whole attitude about clothes—I think it's very refreshing," Thirlby said.

Kravitz looked every bit the Stuart muse in a black lace dress and blushed cheeks. "Jill dressed me today. She didn't give me any tips, but she was so kind as to adjust my bra straps backstage. She was my personal stylist!" said Kravitz.

Opening Ceremony founders Carol Lim and Humberto Leon posed with Vanessa Hudgens at their presentation at St. Mark's Church on the Bowery.

Clarke-who will star with Smith in the upcoming Broadway production of Breakfast at Tiffany's-looked smart in a cinched pantsuit.

"Rebecca's clothes are so practical and comfortable-I feel like I can move in them, you're not restricted at all in them," Woodley told InStyle.com before heading backstage to congratulate Taylor on her latest collection. And the perk to being a designer's friend: free styling! "She put a few things together and let me choose which was most suited to me."

Supermodels Petra Nemcova and Coco Rocha struck a pose backstage with Herve Leger designers, husband-and-wife team Max and Lubov Azria. "Every season, we start with the bandage and see what we can do with it that's new," Lubov told InStyle.com. "We were really inspired by nature, and the whole idea of texture that you find in nature, like lilypads and ocelots."

The newly-minted makeup maven whirled into a front-row seat at Rag & Bone working her signature boho style: a loose button-down, ombre tresses, and a smile!

The actresses donned Monique Lhuillier sheaths for a trip to the Theatre at Lincoln Center to see Lhuillier's fall lineup. "This season is about a strong woman. I wanted to to be more sensual. There's a little more more of an Art Deco feeling to the collection, and a definite opulent feeling," the designer told us backstage.

Longtime Tibi fan Olivia Palermo and her boyfriend Johannes Huebl were on hand to see designer Amy Smilovic's streetwear-driven fall 2013 collection at pier 59. "It was really like, 'How do we wear clothes every day and look amazing?'" Smilovic told us backstage before the show. "That's where all the sportswear influences come from."

Designer Christian Siriano squeezed between two of his leading ladies-Shailene Woodley and Ashlee Simpson-backstage at the Eyebeam Atelier in Manhattan. "This collection was inspired by the golden age of Russian Opera. An evening at the Opera was on my mind when I was designing, and I imagined what these women attending would wear," Siriano shared.

After he honored her fight against AIDs at the annual amfAR Gala on Wednesday night, Kenneth Cole caught up with Heidi Klum backstage after his show-his first in seven years!

Octavia Spencer's Oscar dress designer celebrated his 30th year in business with this fall collection-and Angela Simmons was on-hand to help him celebrate. "The inspiration for this collection came from Russia and the clothes of the Romanov Empire," Shoji told InStyle.com. "The idea of an escape to Siberia-that's what inspired me."

Christina Ricci-showing off her engagement bling-and Ashlee Simpson teamed up in embellished tops to watch Richard Chai LOVE send a jewel-toned collection down the runway.

The Irish singer-and the brand's co-founder-worked his trademark tinted shades at the debut of his fall collection filled with rocker staples like leather and studs. 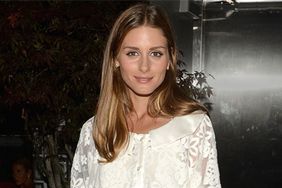 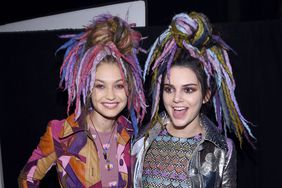 The Marc Jacobs Show Was a Supermodel Parade, and 9 More Things to Know About NYFW's Buzziest Event 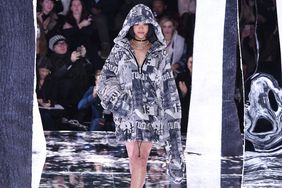