After sitting front row at the John Galliano show, Milla Jovovich took in the latest offering from Louis Vuitton by designer Marc Jacobs. The lacy, racy collection was a departure from the Global-inspired designs of spring 2009.

After presenting a triumphant fall 2009 collection, Karl Lagerfeld opened up Coco Chanel's original studio to fete the release of Another Fashion Book, a compilation of images from Another magazine. Kate Moss and Lily Allen were at the designer's side, Moss in a straight-from-the runway creation she scored backstage at the show. "I've always loved what Karl does," she said.

breakout star Freida Pinto toasted the release of Another Fashion Book following her front-row appearance at the Chanel runway presentation. "I think the show was wonderful," Pinto said. "It was really an experience."

Chanel fan Lily Allen sang, er, scratched for her supper at the Another Fashion Book release party in the design house's haute couture suite. "I just think it's the ultimate in luxury," Allen said of her favorite brand. "It makes you feel really special when you buy something from there." Allen wore a chunky cocktail ring straight from the fall 2009 runway collection.

After making an appearance at Dolce & Gabbana in Milan, Fashion-Week newbie Freida Pinto scored a ticket to one of the hottest shows in Paris: Chanel.

Also sitting pretty in the front row at Chanel was singer Lily Allen, who took a quick break from her world tour to attend the show.

Legendary, and lucky, fashion photographer Mario Testino was flanked by supermodels Kate Moss and Claudia Schiffer at Chanel. After sharing a few laughs, the trio got a first look at Karl Lagerfeld's chic black-and baby-pink-designs for fall.

The stars were out at the Espace Ephemere Tuileries when Christian Dior designer John Galliano unveiled his Autumn/Winter 2009 collection. Charlize Theron (in Dior) shared the front row with fellow Dior muse Eva Green and Milla Jovovich.

While traveling across Europe on her Funhouse tour, Pink joined Stella McCartney in Paris at the launch of PETA's latest commercial. The singer's voice can be heard in the anti-fur spot, along with actor Ricky Gervais. While in the City of Light, Pink also shared the front row with Kanye West at McCartney's Fall 2009 fashion show.

Looking chic in all black, Thandie Newton waited patiently for the Stella McCartney show-held at the Carreau du Temple-to begin.

Newlyweds Salma Hayek and Francois-Henri Pinault were all smiles as they made their Paris Fashion Week debut at the Balenciaga show.

strikes a fashionable pose with actress Elsa Pataky backstage at the show for his eponymous line. The busy designer will make a second appearance at Paris Fashion Week when he sends his designs for Chanel down the runway on Tuesday.

After watching the models strut down what looked more like a city street than a catwalk, Milla Jovovich headed backstage to congratulate Nina Ricci designer Olivier Theyskens on his latest collection.

After playing model and strutting three adventurous looks down the runway at the Vivienne Westwood show, Pamela Anderson joined the designer on the catwalk for her final bow. 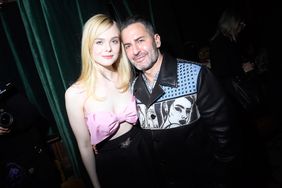