seemed smitten by the glamorous gowns at the Oscar de la Renta show. "It was beautiful," the actress was overheard saying to her entourage, which included star stylist Estee Stanley, after the runway presentation. "I wasn't into this when I was younger. I was into sports. But I'm into it now."

-Bronwyn Barnes, with reporting by Rachel Jacoby and Nakisha Williams

(who paired her Michael Kors dress with jewelry from her own collection for HSN) congratulated her designer pal after his show. "I've worked with him for years as a model, an actress and a humanitarian," said Sims. "His clothes are so simple and so elegant and so all-American you don't even need to do anything!"

After presenting her own fall collection for The Row with sister Ashley, Mary-Kate Olsen joined Selma Blair in the front row for the Proenza Schouler show.

While Justin Timberlake was all business backstage with his William Rast co-founder, Trace Ayala, a certain someone caused a momentary distraction once the show had ended. When asked which Hollywood stars inspire his line, Timberlake said, "I have one celebrity always on my mind," motioning to girlfriend Jessica Biel, who sat next to his mother in the front row. After the presentation, Biel declared, "I loved the show!"

, Melissa George and Molly Sims were among the stars who mingled with Marchesa designers Georgina Chapman and Keren Craig during the presentation of their collection of romantic red carpet gowns at the Chelsea Art Museum. "I started getting ready at 8a.m.," said Sims of her busy day. "I even did my own hair and makeup!"

After a whirlwind week spent promoting her Sports Illustrated Swimsuit Issue cover, Brooklyn Decker saved some energy to take in the Marchesa presentation. "WOW! I'm usually so bum/casual...BUT I'm stunned by the amazing collection. I want to live in Marchesa! YAY Georgina & Keren!" the model gushed via Twitter.

and Abigail Breslin took in Nanette Lepore's show before heading backstage to hang out with Lepore's 12-year-old daughter Violet. "This is my first big fashion show," said Breslin, who took a break from rehearsing her role as Helen Keller in The Miracle Worker on Broadway to have a Fashion Week experience. "I do love fashion. I actually started sketching even though I'm not really good."

Mulberry muse Alexa Chung (the British label named a handbag after her) took a seat next to Jessica Stroup to preview creative director Emma Hill's fall collection at Soho House.

At famed New York City department store Bloomingdale's, Mary J. Blige and designer Catherine Malandrino teamed up to unveil the limited edition T-shirts from the FFAWN + Catherine Malandrino capsule collection, which will benefit the Foundation For the Advancement of Women Now. When the stock sold out, the pair were happy to sign pictures and plain white tees for the crowd of eager customers. 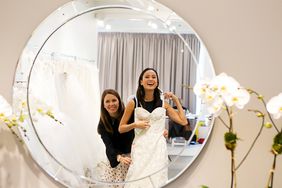 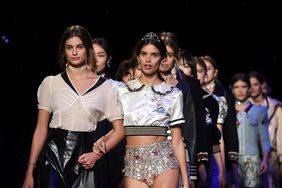 NYFW Spring 2017 Schedule: A Show-By-Show Breakdown of the Week 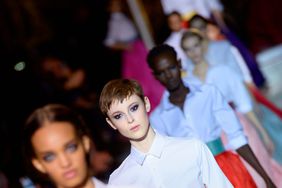