and Mary-Kate Olsen opted for an intimate gallery space to present their fall collection (and first at New York Fashion Week!) for The Row. Among the looks the sisters sent down the runway were a belted wrap coat paired with black trousers, a carriage skirt in a crocodile pattern and a leather corset over an asymmetrical dress.

showed her support at the Rodarte show in a chic silver patterned dress by the designers. The actress has been a longtime fan of the Mulleavy sisters, often walking the red carpet in looks from their collections (she even wore a piece from their recent Target collaboration!).

After hitting Opening Ceremony's bash at the Ace Hotel, Kirsten Dunst (in a Rodarte T-shirt) and Jason Schwartzman popped up at the Rodarte show, which took place at a New York gallery. For fall, the designers mixed patterns and textures, from floral prints and embellishments to shearling and lace.

They're "elegant and feminine every time," said Mad Men star Christina Hendricks (in a Temperley blouse and Ports 1961 pants) of Badgley Mischka's designs. The actress started fashion week off with the duo's Fall 2010 show. Her must-have item for the week? "My cell phone," Hendricks said. "I can text all my friends how exciting it is and what I think."

The worlds of film and fashion came together when Armani hosted a fete celebrating the release of scary movie Shutter Island and marking the first anniversary of the label's 5th Avenue flagship store. "I'm in all Armani," said Emily Mortimer, who joined co-stars Patricia Clarkson, Mark Ruffalo and Leonardo DiCaprio for cocktail hour in the Armani Ristorante. "My mom, who's here tonight, is in all Armani too. She had the best day of her life. When she was told she could get into a car and go to Armani and pick anything she wanted, it was a dream come true!"

-who played host for her absent uncle Giorgio-welcomed Sports Illustrated Swimsuit Issue cover girl Bar Refaeli and Michelle Trachtenberg to Armani's cocktail party for the cast of Shutter Island. "We have a lot of celebrities already fighting over the Armani Prive evening gowns," Roberta said when asked to name the latest must-have from her family's iconic brand. "I'll probably never get to wear one, but I dream about it!"

Actress Shannen Doherty sat next to Kelly Osbourne in the front row at G-Star. Osbourne, who modeled days earlier at Betsey Johnson's show, shared her experiences on the runway. "It's so much fun that the reality of me actually walking didn't set in until they started pulling the plastic off the runway and I thought, 'OMG,'" she told us.

At The Blonds' runway show in the Altman building, Adam Lambert accented his all-black ensemble with gold claw gloves. The pop star wasn't too shy about dishing on his distinctive style: "I try to bring an element of glam. I'm not worried about being over-the-top. I mean, obviously, I wear eye glitter!"

, Estelle, Melissa George and AnnaLynne McCord soaked in the minimalist looks at Max Azria's Fall 2010 show. "The good thing about Max Azria is that you feel sexy in the clothes no matter what you're wearing," said McCord (in a Max Azria top). "So I said, let's try to be sexy with a turtleneck-it's cold out!"

Actress Amber Heard wore a Diesel Black Gold dress ("I've tucked it into my pants to give it some drape") and leather jacket to the line's Fall 2010 runway show. "I love that it's tough and strong. They also incorporate feminine details into their work, so it's a lot of nice fabrics and tailoring," she said of Diesel Black Gold's collection, the debut for its new lead designer, Sophia Kokosalaki. 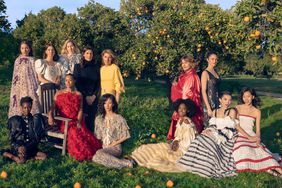