Fashion people, rejoice! Raf Simons has arrived. There on the corner of 39th Street and Seventh Avenue, in the offices of Calvin Klein, was Raf. Raf! Raf!!!

Can you tell that we’re excited?

After a snowy, slushy start on Thursday, when most of the city was shut down and some other designers presented pretty unremarkable collections, New York Fashion Week got its first real boost of energy on Friday morning with Raf’s debut collection for Calvin Klein. It was an eagerly awaited moment that seems like it was eons in the making.

Raf Simons is, of course, one of the most widely respected and enormously talented designers of the last few decades, or maybe forever. His modern interpretations of Jil Sander and Dior during his respective tours through those iconic houses set the tone for much of European fashion and the red carpet, to the extent of Dior’s relationship with Hollywood stars like Charlize Theron and Jennifer Lawrence. And now, he belongs to New York, as chief creative officer of Calvin Klein. How could you not be on the edge of your seat?

It has been fascinating to observe just how much importance the fashion world has placed on his arrival here. During the men’s collections last week, Simons was credited as having single-handedly given the three-year-old event credibility and heft, and this for a show of some lumpy NY sweaters. But his debut at Calvin – the quintessential house of American sportswear – was the big moment everyone was waiting for, and that included a lot of celebrities like Julianne Moore, Sarah Jessica Parker, Gwyneth Paltrow, Lauren Hutton, and Naomie Harris. Millie Bobby Brown, who appeared in a teaser Calvin Klein campaign, recently, was there, too, all of us sitting in a cement showroom that had been decorated with hanging swaths of denim and miles of yarn fringe – this an installation by the artist Sterling Ruby. And there was a palpable sense of thrill in the air as the show began with the lyrics of David Bowie’s “This is Not America,” and the first model stepped out wearing a crisp uniform of a crisp blue blouse and red band trousers, worn with a white turtleneck embroidered with the number 205, after Calvin Klein’s street address.

Simons, a Belgian now making New York his home, described the collection, which included both men’s and women’s wear, as an homage to America, starting with the red, white, and blue. And it included many nods both to Americana (sportswear, quilting, moto jackets, denim, even a fringed Old Glory skirt) and to the visual history of Calvin Klein. There are obvious parallels between Klein and Simons as designers. Both are obsessively forward looking, personable but sometimes shy, and more engaged with contemporary forms of art, branding, and commerce than they are with the inanities of the fashion system. Perhaps the most compelling nod from Simons to Klein was a logo created for his jeans, a small silhouette in the shape of Brooke Shields from a famous Calvin Klein jeans advertisement. Simons also seemed exceptionally impressed with his new office address, embroidering 205 all over the turtlenecks and adding the full address to a handbag, perhaps so people know where to send him flowers.

Another smart connection was the blurring of gender lines with women’s looks that almost always corresponded to men’s looks in the show, which featured his-and-hers suits, see-through sweaters, and overcoats. Klein, of course, created the first commercial powerhouse unisex fragrance with CKOne, so it was interesting to see where Simons was looking. And taking apart the collection, it was fairly easy to see the commercial appeal of his sportswear pieces, namely the spongy blouses and loose trousers, while also somewhat surprising in that it did not carry a more daring or challenging message.

In fact, the most envelope-pushing element of the show was that many feathery dresses and coats were covered with a layer of clear vinyl, like a protective covering on grandma’s couch. It became tempting to read into Simons’s intentions. Was he suggesting we needed protective clothing in dangerous times? Was he channeling Patrick Bateman? Did it really matter? Not according to him.

“Not one era, not one thing, not one look,” he said in his show notes. “It is the coming together of different characters and different individuals, just like America itself.” 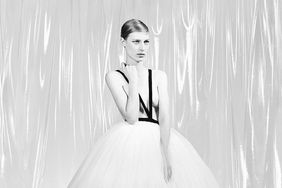 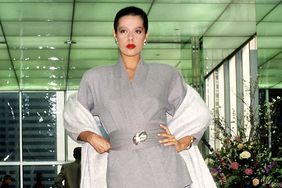 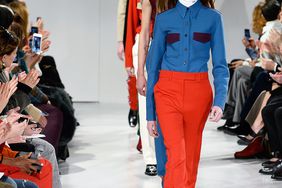 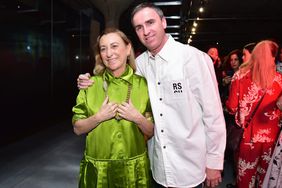 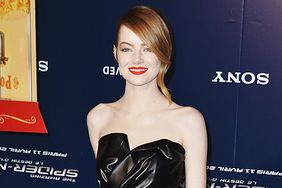